Stymied: I versus Me. 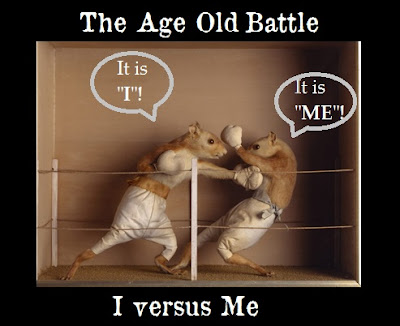 Stymied schmy-mied. I can answer this one for ya! Maybe.

It's a source of debate lately and understandably so. The English language is ever changing and evolving, not that it made much sense to begin with. Add creative writing into the mix, and you hear every kind of reasoning for bending, or sometimes shattering, the rules. But for grammar's sake (aside from the fact that I started this sentence with but), let's at least know what rule we're breaking and how, shall we?

I think I and me are one of the most common mix-ups I see, simply because the proper use doesn't always sound correct. It's a lot like not ending a sentence with a preposition, even though we all do that now. No one asks, "For what are you looking?" Well, unless you're tapping into your inner Shakespeare.

So, what's the difference?

The traditional grammar rule states when a pronoun ( I, he, she, they, etc.) follows a linking verb (is, be, seem, appear, etc.) the pronoun should be in the subject case. It’s also called the nom-nom-nom “nominative.” Linking verbs don't describe an action so much as describe a state of being. When pronouns follow these non-action verbs, you use the subject pronouns such as "I," "she," "he," "they," and "we."

Confession: My mom was right. "This is she," is correct. Thanks, Mom.

What does it all mean?

That means it is grammatically correct to say, “It is I.”  Congratulations, gold-belted rat. You landed a mighty blow.

A few examples, WHY they work, and HOW you can think about it:

Try reversing the order of your statement and see what sounds correct.

See what I did there?

But wait ... silver-belted rat staggers into the center ring! He ... he's making a comeback!

90 percent of you are probably thinking, "Yeah, nobody talks like that anymore!" And you would be right. In the book, Woe Is I, Patricia O'Connor notes that almost everyone says, “It is me,” and that the “It is I” construction is almost extinct. (Grammar Girl)

The Merriam-Webster Dictionary of English Usage says that it’s a style choice, and that “It is I” is formal and, “It is me” is casual. Needless to say, unless you're clerking for NYU's English department or writing an article for The New York Times, you're probably in the clear ... in this matter!

Happy writing!
Posted by Hope Collier at 9:32 AM 1 comment: