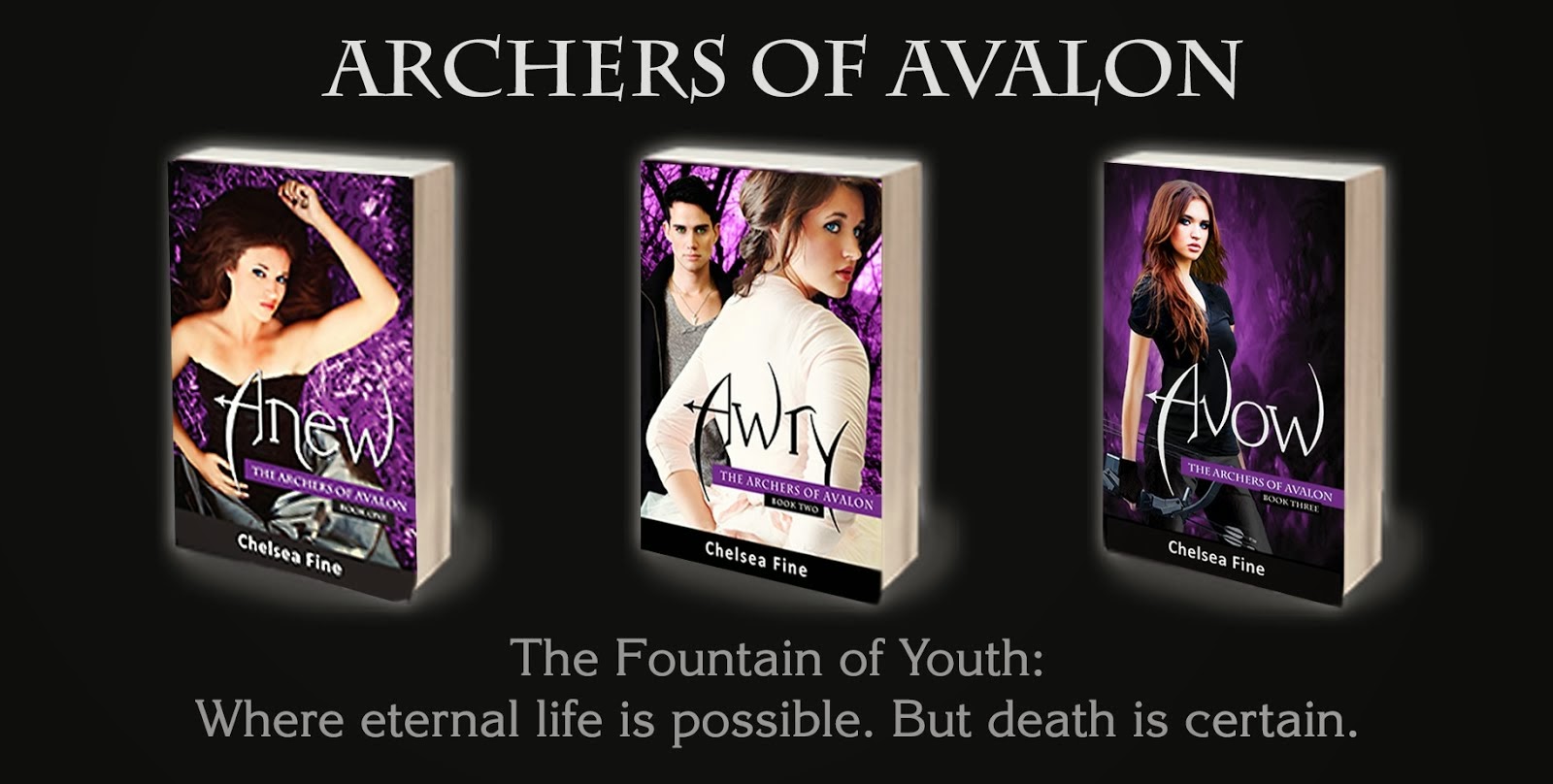 Okay, so y'all know how much I adore Chelsea Fine! She's like the Jennifer Lawrence of Writerdom. You know who I'm talking about, the really cool girl next door who's gorgeous, hilarious, and super down-to-earth. Well today, I have the honor of interviewing her about one of my all-time favorite YA series ev-ah, The Archers of Avalon! If you haven't read my reviews of these epic examples of awesomeness, click on each to find my thoughts on Anew, Awry, and Avow.


* How did you come up with idea for the Archers of Avalon series? 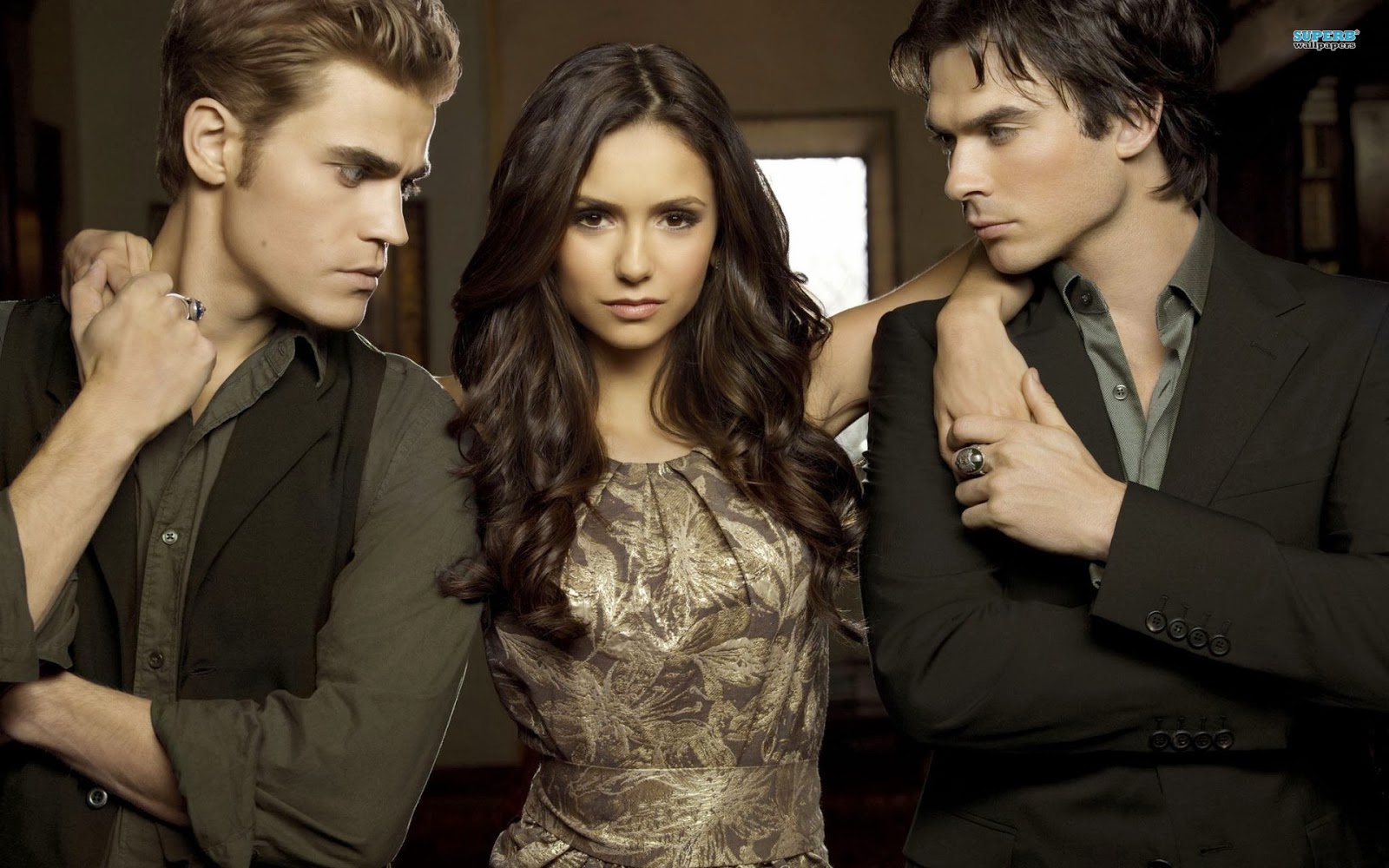 The short answer is Vampire Diaries. The long answer is I was watching Vampire Diaries with my sister and we were talking about how sad it is to have a love triangle between two brothers because the brothers love one another and they love the same girl…it’s tragic. And I started thinking of what another spin you could do with two brothers who love the same girl, but something less doom and gloom. Thus was born, my Archers of Avalon series.

* As an avid archer myself, I loved the fact that twins and Scarlet were into shooting. Why did you choose that as a pastime?
First of all, I LOVE THAT YOU’RE AN ARCHER!  Super rad. I chose archery as a pastime because it’s cool! It’s skilled weapon that requires patience and aim, and lots of experience. I like that. I thought it was a good weapon for characters who were going to be 500 years old. It just worked all around.

* After reading the series, I researched to see if Avalon, Georgia really existed (and YES! it does! I’m SO going one day.) What made that location ideal for the series?
It was sort of an accident. I didn’t know that Avalon, Georgia existed before I wrote the book. The Ponce De Leon Fountain of Youth story was not actually in lower Florida, but northern Florida. That’s where his ship landed; just south of Georgia. So I was thinking, wouldn’t it be neat if the Fountain of Youth was actually in Georgia and all the history books were totally wrong about this myth? So I put it in Georgia with these archers and then I wanted a city that started with an ‘A’ so I chose Avalon. After I wrote the first draft and discovered there was actually a city called Avalon in Georgia, I figured it was just fate. It was an accident, but totally fate.

* The idea behind the curse and the trio’s connection is SO freaking cool and unique. How did you come up with that, and what inspired you to choose The Fountain of Youth as a building block? 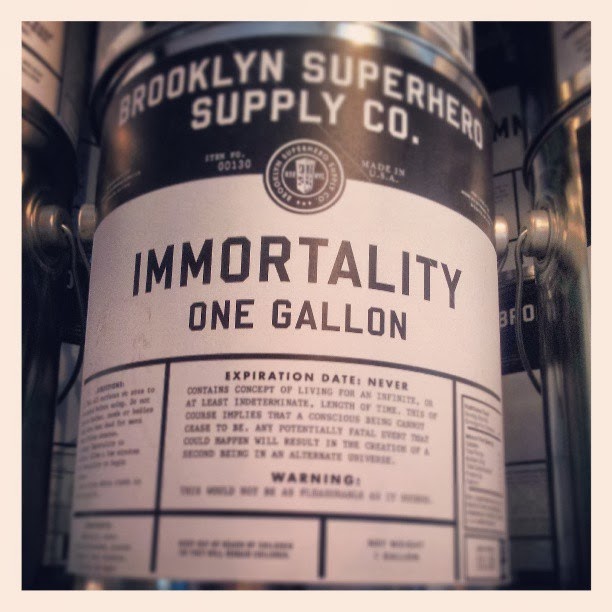 I spent months and months of thinking about the story, so the curse was actually different in my head. But that’s the cool thing about writing. While you’re writing a story, you’re also re-writing it as more ideas come to you. I wanted to make sure there was a curse where all three members of it were affected in a unique way; not something where they all had the same issues. And I wanted it to be a curse where finding a cure would be critical to the characters’ happiness. So it was just a matter of a lot of time and thought and trial and error with writing it. I wanted immortality, but not vampires so I decided to go the Fountain of Youth route and explore that. If we could live forever, would that be a good thing or kind of a curse? That’s the question theme in my Archers of Avalon books.

* I absolutely adore your characters!!! Were any of them based on yourself/preferences or people you know?
Oh, that’s a really good question! No. Scarlet is definitely not based on me. You and I have met in person so you know that I’m not very awesome and cool and strong and sassy like Scarlet. Haha. I’m much more like Heather. I think Scarlet is based on who I wish I could be, with lots of strength and attitude. I based Tristan a little bit on my husband who has this very dark and sacrificial side to him in a really beautiful way. And Gabriel…I don’t know. I think I just created a character who would be the opposite of Tristan: a little more selfish and happy and carefree.

* Are you a plotter or a pantser?
I’m a pantser! That’s why it takes me forever to write books, haha. I try to plot, but I can’t seem to follow my own rules. It’s just all bad. Haha.

Music. I know there are a lot of other things that inspire me, but music is by far number one. I created the whole first book, Anew, by listening to “Cosmic Love” by Florence and the Machine. I put that song on repeat for three days and mapped out the whole book in my head.

* What do you enjoy doing in your free time?
I really like painting and drawing and playing the piano and singing…anything artistic, really. I find art and music really calming and soothing. But I also enjoy watching teenage drama on television. Like, a lot. Haha.

* What awesomeness can we expect from you in the future?

My New Adult series is coming out this year and I’m really excited about it! New Adult is like Young Adult with a little bit of an edge, and a few more consequences. This is a contemporary series, though, so there’s no Fountain of Youth and no curses or anything like that. Just plain old realistic love and drama. But it’s a sweet series and the first book, Best Kind Of Broken is really special to me, so I’m thrilled to release it this March. J

* What 3 things would you take to live on Isle Chelsea:
Um, this question is awesome. A toothbrush! I would totally take my toothbrush! I’m obsessed with clean teeth. And maybe The Count of Monte Cristo, my favorite book of all time. And my husband. I would take my husband because he’s my best friend and, really, you can endure anything if you have your best friend with you. ;)

* Favorite book character:
Will Herondale from Cassandra Clare’s Infernal Devices. He’s my very favorite. He reminds me a lot of Tristan, but he’s a bit more tortured, darker. He’s so broken and he’s such a mess. I just want to mop him up and make out with him. Haha.

* Best YA read this year:
I read The Beginning of After by Jennifer Castle and it was probably one of the most moving books I have ever encountered. It was beautiful and broke my heart. Wonderful.

* You life’s theme song:
“Heartlines” by Florence and the Machine.

HUGE thanks to Chelsea Fine for the interview!
Check out her books on Amazon, Barnes and Noble, and
everywhere books are sold.
You can find more on Chelsea and her books here: 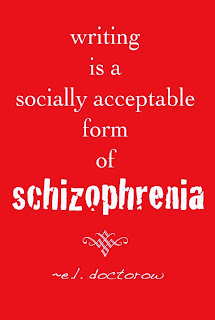 E.L. Doctorow said, "Writing is a socially acceptable form of schizophrenia." And every writer I've ever asked would agree. The thing is, the voices and conflicting opinions are so much louder inside our own brains. It's like having kids rollerskating through your house at the same time your husband is talking on the phone, yelling over the man channel that's currently blaring on TV, all while your trying to herd feral cats.

And the crazy doesn't end there. Being an author is living in a constant state of emotional turmoil when it comes to your writing, your editing, your time ... your sanity. Then you throw other people into the mix. You know, the only ones who kind of terrify you but you can't live without.

Now don't get me wrong. I freaking love my readers. They're absolutely my heroes. But they're also kind of like lurking peeping Toms because you know they've seen the inside of your very soul. Talk about a horror movie in the making.

The Writer.
Coming soon to a sanatorium near you.

But here's the thing. When you've known someone your entire life, and you're already an intensely private person, letting them thumb through the pages of your very make up and matter is a completely sanity stripping event. Granted, most readers don't approach books like writers. Thank God. They're still at a place where they can just sit back and enjoy a story for its entertainment. But when your middle-aged aunt or college-bound nephew picks up the YA romance you yourself constructed, you immediately rethink this incredibly poorly notion of being a writer.

You want people to like your story, to connect with your characters ... and then it completely freaks you the frick out when they do. Like, eeyuw. Please, dear aunt, don't ask me which of my male leads I think is hotter.

Of course there's the other side to the story. The one where you know that neighbor adores reading ... YA books ... and has never mentioned yours. Ever. Instant fear, doubt, and skepticism. 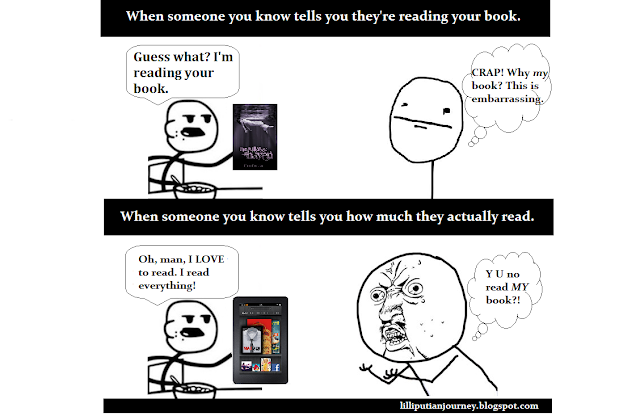 Yeah, this is the hell contained in a writer's brain. Or maybe just my brain. It's hard to say.


Happy Writing.
Posted by Hope Collier at 2:00 AM 1 comment: 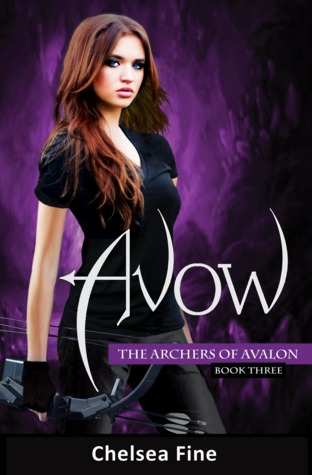 Scarlet remembers. Everything. Her past lives, Tristan, Gabriel, Nate: she remembers it all--including how to get to the Fountain of Youth. But time is running out.

Heather and Gabriel have been kidnapped by Raven, while the curse that has plagued Scarlet and Tristan for centuries has shifted, putting the star-crossed lovers in more danger than ever before. Water from the Fountain of Youth is the only thing that can save Scarlet and her loved ones. But the water comes at a price.

With lives--and hearts--at stake, Scarlet leads her friends on a dangerous journey to the Fountain of Youth. Where eternal life is possible, but death is certain.
Oh, man. The third and final book in the Archers of Avalon series. I don't even know where to begin. This series was such a roller coaster of emotions, at times I had to just lay it down and walk away for a minute. Trust me when I say that's a *good* thing! Chelsea is just an amazing author with a true sense of her characters. They're each so distinct and unique. She really is one of the best character writers I've read. I can't even begin to express my bumminess at this series being over. Sigh.

So, AVOW. Yeah, it was pretty much in every way epic. Scarlet and Tristan are as amazing as ever. You absolutely can't help but cheer for them! With the characters finally knowing what's up and fully understanding the curse and what it entails, they all take on such a stronger role. It's seriously impressive! Early on, I wondered how Chelsea would tie everything up and leave the reader satisfied with the character's fates. Worry not, my dears. While there are moments of joy and heartache, of loss and triumph, you'll be happy with everyone's futures ;)

AVOW was definitely my favorite of the series, and I thought after the first two, they couldn't be topped. Happily wrong! The banter and inner monologue between the characters is flawless and hilarious. Chelsea has a beautiful way of taking the edge of an otherwise serious situation. BUT this doesn't take away from the seriousness. It's like some kind witchery. I don't even know how she does it, but she does it exceedingly well! Gabriel and Heather really excel in this story with their antagonism and sarcastic ways. Oh! And we finally get the whole back story of the characters by getting to experience it. I'd generally say I'm not a fan of the timeline back and forth method, but again, Chelsea owns it!

Easily one of my all-time favorite series, I can't recommend AVOW highly enough!

Posted by Hope Collier at 3:57 PM No comments: