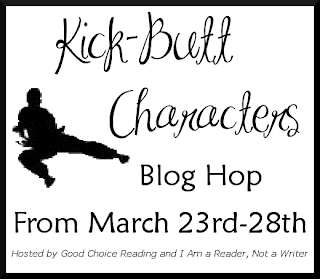 When it comes to kick-butt characters, I think one of my favorites is Tris from Veronica Roth's Divergent. Talk about a strong leading lady, this chick knows what she wants, who she is, and doesn't wait around for anyone to rescue her. Tris defies expectations and chooses her own path, not letting anyone get in her way.

Here's a little more about Divergent: 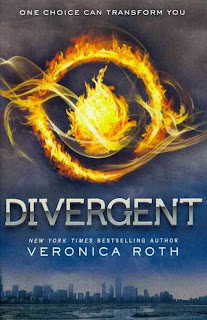 In Beatrice Prior's dystopian Chicago world, society is divided into five factions, each dedicated to the cultivation of a particular virtue--Candor (the honest), Abnegation (the selfless), Dauntless (the brave), Amity (the peaceful), and Erudite (the intelligent). On an appointed day of every year, all sixteen-year-olds must select the faction to which they will devote the rest of their lives. For Beatrice, the decision is between staying with her family and being who she really is--she can't have both. So she makes a choice that surprises everyone, including herself.

During the highly competitive initiation that follows, Beatrice renames herself Tris and struggles alongside her fellow initiates to live out the choice they have made. Together they must undergo extreme physical tests of endurance and intense psychological simulations, some with devastating consequences. As initiation transforms them all, Tris must determine who her friends really are--and where, exactly, a romance with a sometimes fascinating, sometimes exasperating boy fits into the life she's chosen. But Tris also has a secret, one she's kept hidden from everyone because she's been warned it can mean death. And as she discovers unrest and growing conflict that threaten to unravel her seemingly perfect society, she also learns that her secret might help her save those she loves . . . or it might destroy her.

Excited yet? If you want a chance to win an eBook of this NTY bestseller, just follow the instructions on the Rafflecopter below.

As always, many thanks to I am a Reader, Not a Writer and Good Choice Reading.

Vilifying the Villain: Characterizing Your Scoundrel. 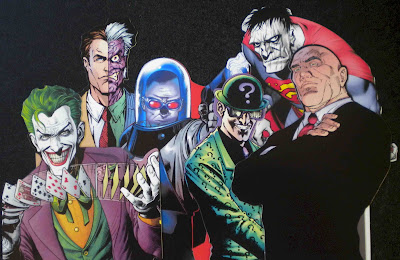 Maybe it's just me, but there's something about a well-written villain that makes him/her as fantastic (and sometimes even more amazing) as our hero. Maybe it's the fact that we can identify with their flaws and struggles. Maybe we as chicks (speaking for my gender) have some need to nurture their wounded souls. Who knows? But you can't deny that we love bad guys! After all, a hero is only a hero when he has an adversary. Right? 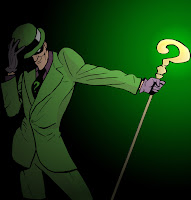 So what makes for a good villain? A dark costume? Wicked laughter? A plan for world domination? Yeah, sometimes. Especially if you're The Joker or Magneto. But the villains I crave are the ones with scarring histories and twisted motivations. Why did they choose that path? What caused that switch in their brains to turn to the dark side? Who in their past damaged them to the point of losing that small part of their humanity? What makes them tick? All of these questions have to be addressed if you want to write an incredible villain. 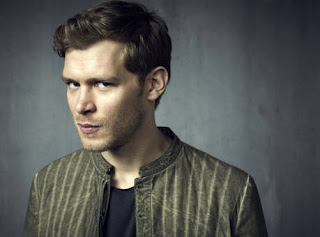 Presently speaking, my very favorite bad guy is Klaus Mikaelson from The Vampire Diaries. If you aren't familiar with the show, here's a brief rundown. Klaus makes his insidious debut appearance in season two (2011), slaying part of the loveable cast, cursing those he didn't kill, and cementing his place on the TVD blacklist for all eternity ... or so we thought.

Enter present day Mystic Falls, Virginia. We see Klaus - now much more human-like, vulnerabilities and all - and not only do we feel for the life-sucking vampire, we're actually rooting for him! Sometimes I almost feel guilty for wanting him to have a successful life, like I've been lured over to the dark side myself. So what happened? How did we go from wanting him to suffer all the pain he'd put our heroes through to hoping they'd cull a few of our leading guys and make a permanent spot for him?


He became relatable. We learned the history of his family. Klaus' father (of sorts) chased him for centuries, trying to kill him and his siblings. His dad made a spectacle of him, taunted and pushed him. You can't help but sympathize with the guy. Then we meet Klaus' mother. Granted she loved him, it didn't stop her from pursuing the same path as her husband. Klaus is hated by everyone around him. He's never known loyalty or genuine love. His whole motivation when he entered the scene to begin with was the desire to have someone there who would never leave him, never betray him. Now we see him with the girl he's fallen in love with. The darkness inside him isn't gone by any means, but we can see that small glimmer of a chance that he might one day make a selfless choice by someone.

So what makes that villain someone we love to hate? Even though he's on the extreme side of the pendulum, he's not so very different than we are. He still walks the edge of the knife, chancing a fall to one side or another, but we have hope.

When you feel pain for the enemy, that's when you're witnessing a well-written villain.

Posted by Hope Collier at 1:48 PM No comments:

Pass the Voice: A Look at Identifying and Eliminating the Passive Voice. 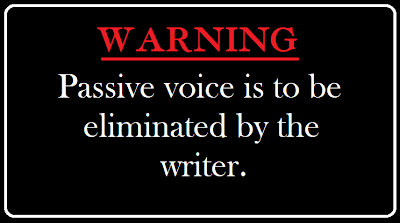 We hear it all the time: avoid using the passive voice. If you're anything like me, you need to know what passive voice is to begin with. Only after identifying something can you learn to fix it.

Oftentimes, we associate the "to be" verb with passive voice. That isn't the case in every instance, though a to be verb is frequently to blame in a problematic sentence. We'll come back to this thought in just a minute.

Now then, passive voice = when the subject of the sentence gets an action VS. doing the acting. 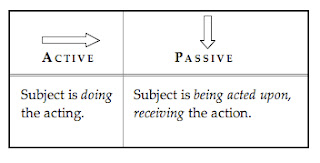 Megan's hair was blown by the wind.

This is a passive voice sentence. Megan (our subject) isn't actually doing anything here despite being the intended focus of the sentence.

To make this an active voice statement, all you'd need to do is reverse the order, giving the action (blown) to the proper subject, (in this case, the wind).

Notice when switching the subject to the wind, Megan becomes the secondary idea of the sentence. The focus has now shifted to the wind, giving it priority. If you need to keep Megan at front and center, she needs an action to accomplish.

The wind blew Megan's hair. She pulled it into a ponytail.

There are occasions where we run into a questionable sentence.


Megan was brushing her hair.

Megan is the subject here, and she's the one taking action. Megan (subject) was brushing (action). What trips writers up is seeing the -ing word as well as the "to be" verb was. While this is technically not a passive voice sentence, it's definitely indicative of a weak sentence. The suggestion would be this:

Bam! We've automatically strengthened the sentence by choosing the stronger verb. More often than not, this is the right choice. BUT as it goes with the English language, it isn't a hard and fast rule and depends entirely on the intent of the sentence. Consider this:

Megan was brushing her hair when a gust of wind blew it across her face.

Even though the red flags are there for a passive sentence, the only problem here is the fact that it's telling VS showing. If you changed it to Megan brushed her hair when a gust of wind blew it across her face you've changed the meaning of the sentence altogether. The wind blowing is an action that takes place in the middle of her brushing. She doesn't brush her hair only when the wind blows it across her face.

Now that we've learned to identify passive voice, the question is: how do I fix it?

The first thing you can do is check for those irksome "to be" verbs. Do a Search/Find for the following words in your document:

If you search them one at a time, you can go carefully sentence by sentence and analyze it. If it isn't using the passive voice, consider replacing the "to be" verb with a stronger one or rewording the sentence. Sometimes it works, and sometimes it doesn't. Just remember, the goal is to eliminate a passive voice when it doesn't negatively affect the look/voice/intent of the sentence. Keep in mind, there will be a few occasions where the passive voice is not only necessary, it's stronger for the situation. Listen to your gut. You know what you're trying to say.

Happy Writing.
Posted by Hope Collier at 5:52 PM No comments: 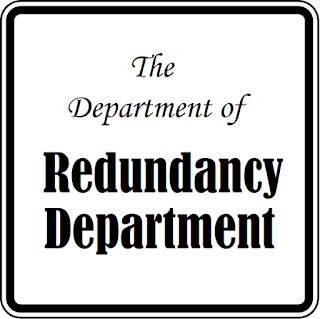 Being a writer is a game of constant growth. Authors are always learning, growing, and expanding their knowledge in developing their craft. One of the more common issues I see (and more than deal with myself) is overwriting. Overwriting encompasses a number of problems, but today I'm thinking more along the lines of redundancy.

To understand how to fix a problem, you first have to learn to identify it.

n-see] noun, plural re·dun·dan·cies.
1. the state of being redundant.
2. superfluous repetition or overlapping, especially of words.
3. a redundant thing, part, or amount; superfluity.
In other words, redundancy is saying the same thing in different way or adding words that aren't needed. Not only does this lengthen your work unnecessarily, it makes for a tedious and frustrating read.
What are some examples of overwriting through redundancies?
First, there are what I like to call, my 'doh' moments:
* I shrugged my shoulders. Well, yeah. Unless you have some double-jointed hips or something, what else are you going to shrug? You don't lose anything by cutting my shoulders, and your story will only read stronger for snipping the excess.
* My heart pounded inside my chest. If you aren't on an operating table with your ribs cracked open (or maybe in a freaky horror novel), your heart can't beat anywhere else. Remove the superfluous words.
Trust me when I say, we ALL do this at some point in our writing journey. It's a learning process.

Next, there's stating the obvious through reiterating a thought or emotion.There are several redundancies in the following sentence. Can you identify them?

"I hate those flying monkeys!" Mark yelled in anger.

1) The use of an exclamation mark. Given the context of a scene, an exclamation mark should be enough in itself to show excitement, anger, or fear. This would be a great time for an action should you need to identify which character is speaking.

Say it better: "I hate those flying monkeys!" Mark slammed his fist against the shed.

2) The use of the word yelled. Yelling (in general) is an obvious sign of anger. There are circumstances, however, where yelling doesn't always mean aggression. This is the time to choose a better word for clarity's sake.

Say it better: "I hate those flying monkeys," Mark growled.
So, now you know! Look carefully at each sentence you write and consider redundancies.