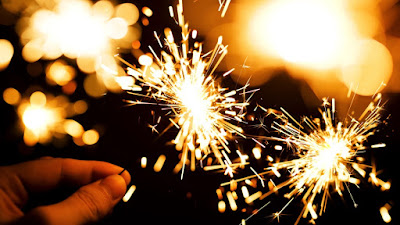 Several years ago, my wonderful friend and personal Yoda, Elizabeth Isaacs, introduced me to her New Year's tradition. Anyone who knows me, realizes how much I truly loathe New Year's resolutions. Most of the time, it's a poor excuse for good intentions, and more often that not, you don't fulfill them, and you wind up feeling like a failure. This reaction often leads to you reverting back to old habits with a vengeance.

Back to my point, Beth told me her tradition was to name her new year based on what she hoped to accomplish in those 12 months. Be it personal growth, emotional development, getting your finances straightened out, or choosing a healthier lifestyle, her method meant your upcoming 365 had purpose. By naming it, it'd become more than a 'hope so,' and shifted into an actionable goal. Just like a baby or a pet, when it has a name, it feels more real, tangible. And you connect with it.

I began doing this back in 2015 when my year was titled: The Year of Self-Discovery. I spent the majority of my 30+ years on this planet doing what was expected of me vs being true to myself. It goes without saying, 2015 was a mess in more ways than one. Life kind of fell apart that year, because I'd decided "good enough" wasn't good enough anymore. Understandably, 2016 needed some help.

The following year was named: The Year of Personal Development. I spent 12 months putting my life back together. It started with replacing all the bad I'd weeded out with good things. I lost 60 pounds. I refocused my attention on bettering my situation and state of mind, so I could be a better mom to my kiddos. I tried new things, new jobs, new experiences. I read a lot of non-fiction aimed toward enhancing life and overcoming the garbage from the past. I grew ... and grew. In fact, I grew more in 2015-2016 than I had my entire life leading up it. A lot of is was painful, like quitting a bad habit and having discomfort of missing your 'go-to' fix. I chose the harder road, but what was waiting at the end made that harrowing trip worth every moment.

Now, we're mere weeks away from 2017. I know last year was pretty rough on many. So I encourage you to take a day or week to decide what happened in the last 12 months that you'd like to see different in the future. What would bless you most to have, do, or accomplish? What really gets your heart beating fast when you see it in your life? You'll know it when you find it. But give it a name!
Posted by Hope Collier at 12:05 PM